The Cutting East Team is a small group of local young people who all live in the East End.

We have come to Cutting East with different talents, perspectives and ideas about what makes a good film! 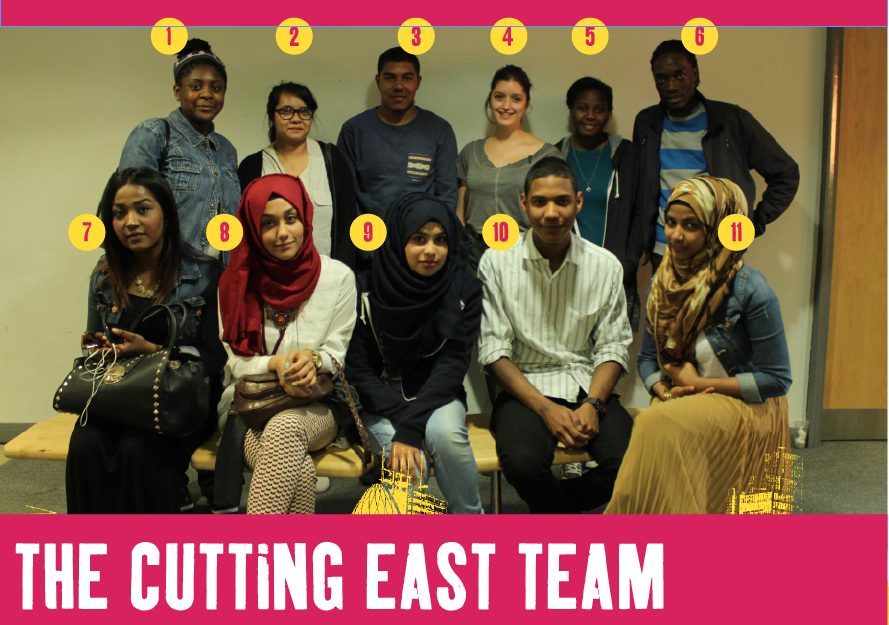 1: LAUREN KWAWU
Hi my name is Lauren, I’m 18 and I am a part of the design team for Cutting East.

My passions include cinema, music and designing things digitally. I am also fond of well told stories, whether in great art, literature, or film. As a young student in east London it thrills me to be a part of Cutting East, bringing a stimulating and fun event to young people in my own community.

2: RIFNA AKTHAIR
Hi, I’m Rifna. I work in the design team for Cutting East. I am 18 years old and currently attending Mulberry School sixth form where I study business and media studies. I’ve really enjoyed being part of the Cutting East team and am really looking forward to the film festival.

3: DIEGO FERNANDO CAICEDO-GALINDO
It gives me a massive sense of achievement to see how far Cutting East has come, especially since I’ve been part of it from the very start!

Being part of the process of creating a film festival has been one of the biggest responsibilities I’ve ever had to take, and with everyone’s hard work I can positively say that we all should be extremely proud of what we have been able to make of Cutting East.

4: ANUSHA MISTRY
I’m Anusha and I love film more than I love fruit pastels. Since dropping art at sixth form (they still call me ‘traitor’) I’ve quenched my creative thirst through tinkering in different design roles in theatre at uni and now, delving into film. I love the idea of using a variety of media to create an enriched experience that is not only meaningful to you, but inspiring too. Cutting East will leave an impression on me because of the incredible people I’ve worked with in such a vibrant community.

5: SHANICE LAWSON
My name is Shanice, I’m 20 years old, an editing and post production student in uni and I have lived in east London all my life. I’ve been part of the programming and marketing team for Cutting East, being super shy and quiet, Cutting East has really pushed me in the deep end to network and become friends with total strangers, minus a few socially awkward moments. I hope Cutting East goes well and becomes a yearly thing.

6: KIERAN HOWARD
I’m an all-round dude defined by experience and ambition. Open-minded, I tend to think outside of the box which makes my thoughts distinct and imaginative. Often I express my thoughts, beliefs and perception about different categories of the world as an artist and writer and pinpoint matters piece by piece.

7: REEMA HAQUE
Well, there’s this girl I know called Reema, a 19 year old budding journalist. She likes to eat. She likes to eat a lot. She also takes an interest in films, documentaries and unhealthy fatty foods. That is all.

8: ROHIMA CHOWDHURY
Hi, the name’s Rohima and I am 17 years old. I love watching movies, which can be seen by looking at my extensive DVD collection, and the unlimited Cineworld card sitting in the pocket of my purse. I’m living life with a freshly baked cookie in one hand and the TV remote in the other. That pretty much sums up my entire life. Oh, and I love to sleep.

9: YASMIN BEGUM
I love watching movies. Of course I never watch or illegally download movies. This is evident through my monthly subscription to Netflix. I like cake. Oh, and I’m an A level student. I like to create short films.

10: JONATHAN CAICEDO GALINDO
I’m Jonathan, 20, and currently doing Film Production at uni. I do the marketing and programming part of the festival. It has being a great learning curve and has given me a new look at how a film festival can be used for self-expression, by laying down a platform for young talent in the East End.

11: AMEENA AHMED
I’m Ameena, I’m 18, I don’t have a clue of what I’m doing but basically I love film and everything about film. And Cutting East allows me to love it even more

12: SHAH FARUQUE
I was born and bred in the east. I’m one of the programmers at the festival. At Cutting East we all have one thing in common and that is film, which takes us beyond the screen and fills us up with diverse emotions, no matter who you are or where you come from and that is why I joined and wish to share this with you. See you at the movies.

13: AMZAD MIAH
Hi, I am Amzad and I live in Tower Hamlets. I am 18 years old, currently studying at Sir John Cass Sixth Form College. I study graphics, business, IT and media studies. I have high interest in drawing and illustration, although in my free time I love taking pictures of anything and everything. In this project I have learnt how to work with new people and it has helped me develop new skills. In the festival I am looking forward to the street art workshop.

14: ALEX PRAAG
Hey I’m Alex. I’m one of the programmers at Cutting East. I joined the project after hearing about it from a teacher at college. Being part of Cutting East has pushed me to consider my future with film.