The Cutting East Team is a group of young people who all live in the East End.

“We have come to Cutting East with different talents, perspectives and ideas about what makes a good film!” 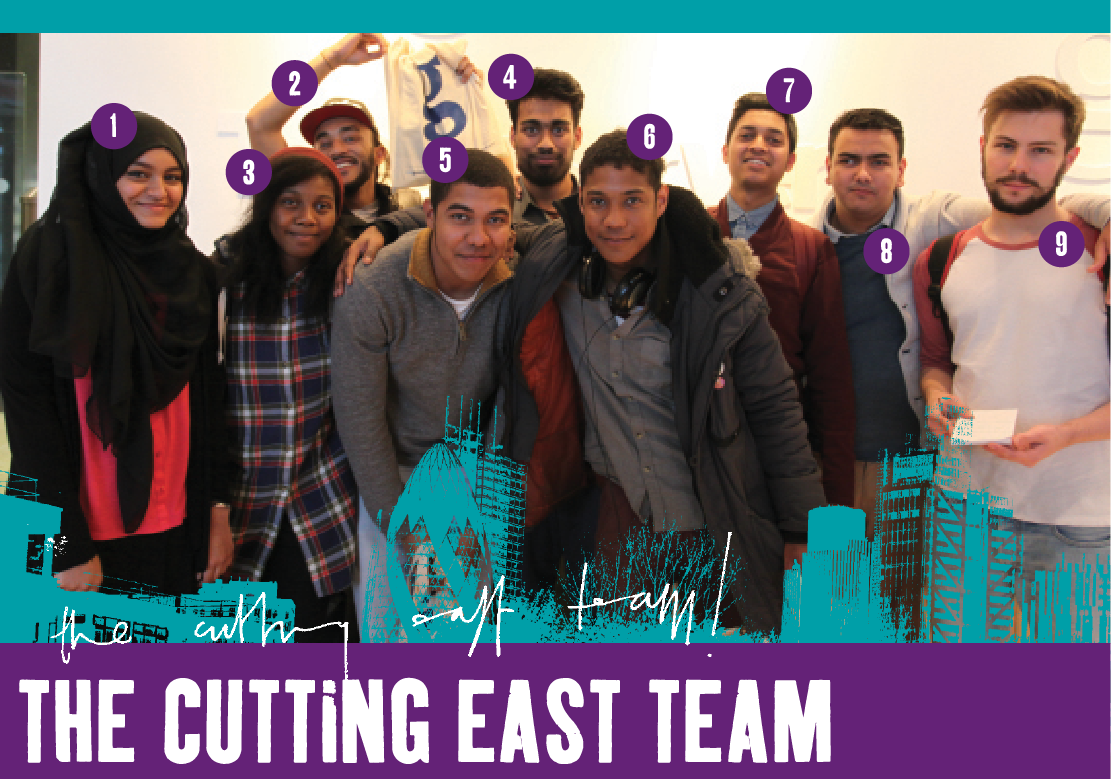 1: HAMIDA BEGUM
Art, culture and creativity: three things that I have great an eagerness for. I absolutely la-la-la-love films! As a keen Geographer and science enthusiast I like to combine all areas and present the most powerful messages through the use of film, as well appreciate them. After all…films can change the world!

2: AKIKUR RAHMAN
My name is Ak, its short for Akikur. I’m from the east side of that river.  I love working on projects that involve creative thinking. I’m a very ambitious and out of the box kind of person.

3: SHANICE LAWSON
Hi! My name’s Shanice and I’m a programmer from last year. I am so excited that Cutting East is back for a second year. I have learnt so much from last year’s festival that I can put into this year. It has really boosted my confidence and although it’s been tough juggling it alongside Uni, it’s really preparing me for life after I graduate.

4: SHAKRUL WAYAS
Hi, I’m Shakrul, 20, studying English at Goldsmiths University. I would say my dream is to get my scripts onto the big screen, but dreams are overrated. I see it as my ambition, and Cutting East aids as a stepping stone to bring me one step closer to fulfilling my ambition.

5: DIEGO CAICEDO-GALINDO
One year on from the first ever Cutting East Film Festival, I feel like we’ve got a team who will be able to deliver a festival that will do 2013 proud! The 2014 team have already made an impact, the ideas are flowing and everyone is contributing to what will be an amazing three days of events.

I feel lucky to be able to share my experiences with everyone who is involved this year, and I can see Cutting East growing and growing to new heights

6: JONATHON CAICEDO-GALINDO
I’m Jonathan, 21. And currently doing Film Production at uni. I do the marketing and programming  part of the festival. It has being a great learning curve and has given me a new looks at how a film festival can be used for self expression, by laying down a platform for young talent in the East End.

7: MIFTAUL ISLAM
The name’s Miftaul Islam – a student and enthusiast of the Creative Arts universe. I have lived on for 2 decades now, and I can happily say, I’ve loved every minute! From a young age, I’ve always found myself being attracted towards this creative world that encompasses us all. Through these years I’ve had a significant growth in my interest towards this world. My main aspirations lie within the path of creative writing and filmmaking, and Cutting East is a fantastic project that allows me to utilise my talents, as well as honing my craft. Cheers!

8: AMRAN AHMED
As an aspiring screenwriter and filmmaker, the opportunity of programming a film festival is a perfect platform to divulge in the world of entertainment and creativity; uncovering an abundance of local talent and hopeful individuals in an effort to create the best possible three day event for our audience. Being responsible for the Cutting East programming team has given me a plethora of knowledge; from meticulously mapping out all the particulars of the event, to understanding what makes a good festival, and what the audience would enjoy. Being a part of the team has further expanded my love for film, and has made me more determined to persevere within the world of entertainment.

9: ALEX PRAAG
Hey I’m Alex. I’m one of the programmers at Cutting East. I joined the project for last year’s festival after hearing about it from a teacher at college. Being part of Cutting East has pushed me to consider my future with film.

10: MO MALICK
My name is Mo Malick. I’m an aspiring actor, director and writer. I’ve always loved story telling and coming from a Somali background story telling is in my DNA. At college I studied creative media which included directing and this is where I was introduced to the power of the camera and how it can be used to tell a story on its own. I first joined Cutting East because I wanted to see how things work, I’ve been to film festivals and now I wanted to be part of one. The selling point for me was all the other programmers were in my age group and we all had similar aspirations.

11: SALMA ISLAM
Salma, here! Becoming an edition to Cutting East was a decision partly made to combat the shyness that tends to override me in situations but mostly because of the one thing that binds us all at Cutting East together and that is our undying love for films!

12: HANIFA RAHMAN
Hi there! my passions for media had film making had encouraged me to be part of  the Cutting East team, as I have always been curious of what it would be like to be behind the production stage of creating a film festival.