Cutting East 2014 commenced with a handful of budding and nervous programmers ready to create a festival like no other. The first few sessions involved the usual ‘ice-breakers’ and ‘getting to know one another’ activities. Soon after we got right into the swing of things, starting off with acquiring knowledge on films, writing, video productions, theatre productions and even heightening our organisational skills.

Anjum Shabbir, film reviewer for ‘Bollyspice’ sparked a particularly interesting idea involving three columns “To Do”, “Doing”, and “Done.” Under each we rotated tasks that we’re either ongoing or complete. Early sessions also involved speaking to others who had, themselves, generated film festivals. The annual festival ‘Shuffle’ is co-managed by Kate; she inspired the group to think of interesting locations, sounds, foods and style to help galvanize the event.

Once the organisation was in place, and inspiration had been gathered, we set to work on understanding social media, and how we can maximise this marketing/promotional opportunity. Here we had the help of Bob who is Cutting East’s resident graphic designer and social media/website coordinator. We learnt about creating a ‘hype’ through the use of ‘Twitter’, ‘Instagram’ and ‘Facebook.’

By session nine most film submissions were finalised or in the process of confirmation, we got down  to creating a full sensory experience, including discovering interesting sounds, poets, dancers, musicians/bands and even food! The team split into smaller groups and we all took a upon a day/theme/category and let the creativity unfold.

Things were starting to come together and it was time to visit Genesis Cinema (Cutting East’s annual location). This session at the cinema allowed us to appreciate the spaces we had and we discussed how we could take advantage of all areas. 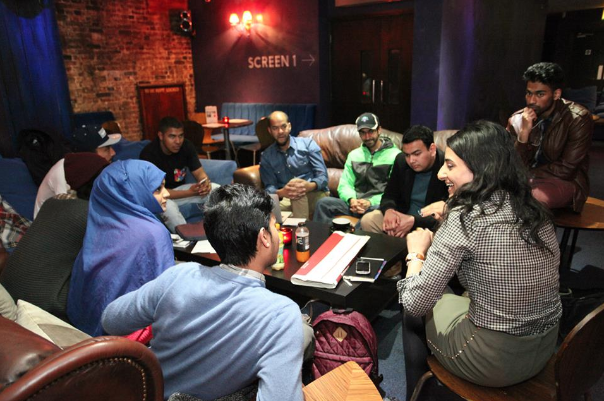 We also had the opportunity of speaking to one of the band members of ‘Alpha N Omega’ who gave a very successful performance on the ‘Back to Bollywood’ segment of our festival.

The following few sessions took place in various locations, one being the BFI where we saw a preview of ‘Amazing Spiderman 3’ and watched a Q and A involving the directors and star actor; Dane DeHaan.

Once we’d secured actors and directors for Q and A’s during the festival it was time to brush up on those interviewing skills. We took a trip to The Guardian and got the rare opportunity to meet with one of the Film journalists/editor who gave us some great advice on getting the most out of our interviewees. As part of our tour we also got to meet some interesting characters from the Multimedia department.

Also, copies of the first draft of the programme were distributed. As always some great and electrifying films have come in last minute and it only added to the excitement.

The following sessions involved intense promoting, we distributed programmes on foot, put posters up all around London, spoke in school assemblies and even on radio!

Cutting East 2015…we look forward to seeing you!